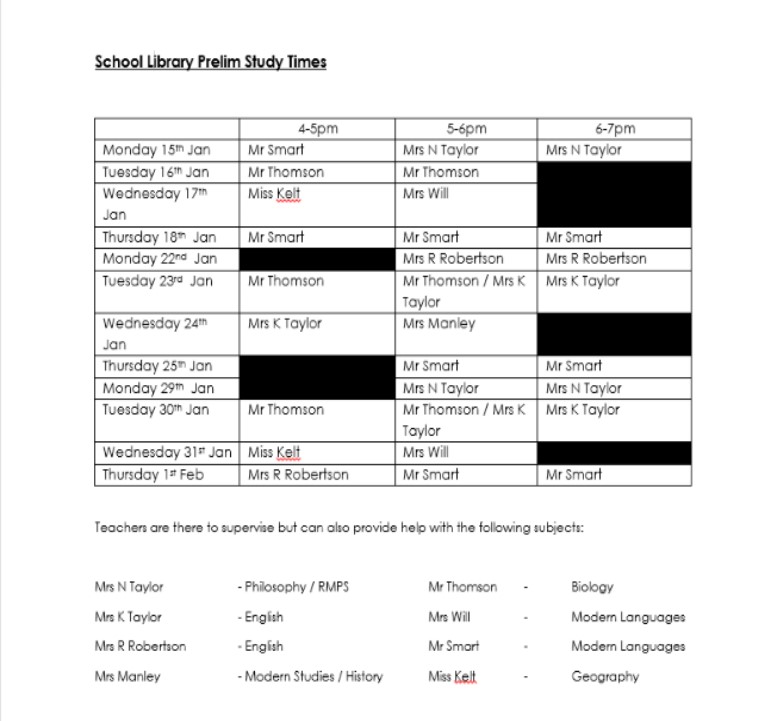 By Montrose Admin | Pupils, School news | No Comments
The school library will be open late on the dates above so that pupils can prepare for the prelims. Please encourage pupils to come along! Opportunities for private study can make a considerable difference to exam results.
0 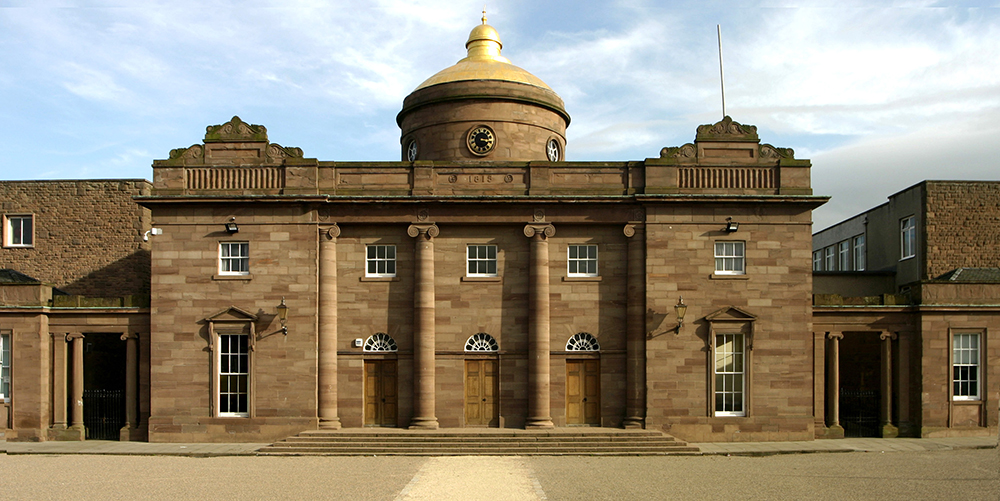 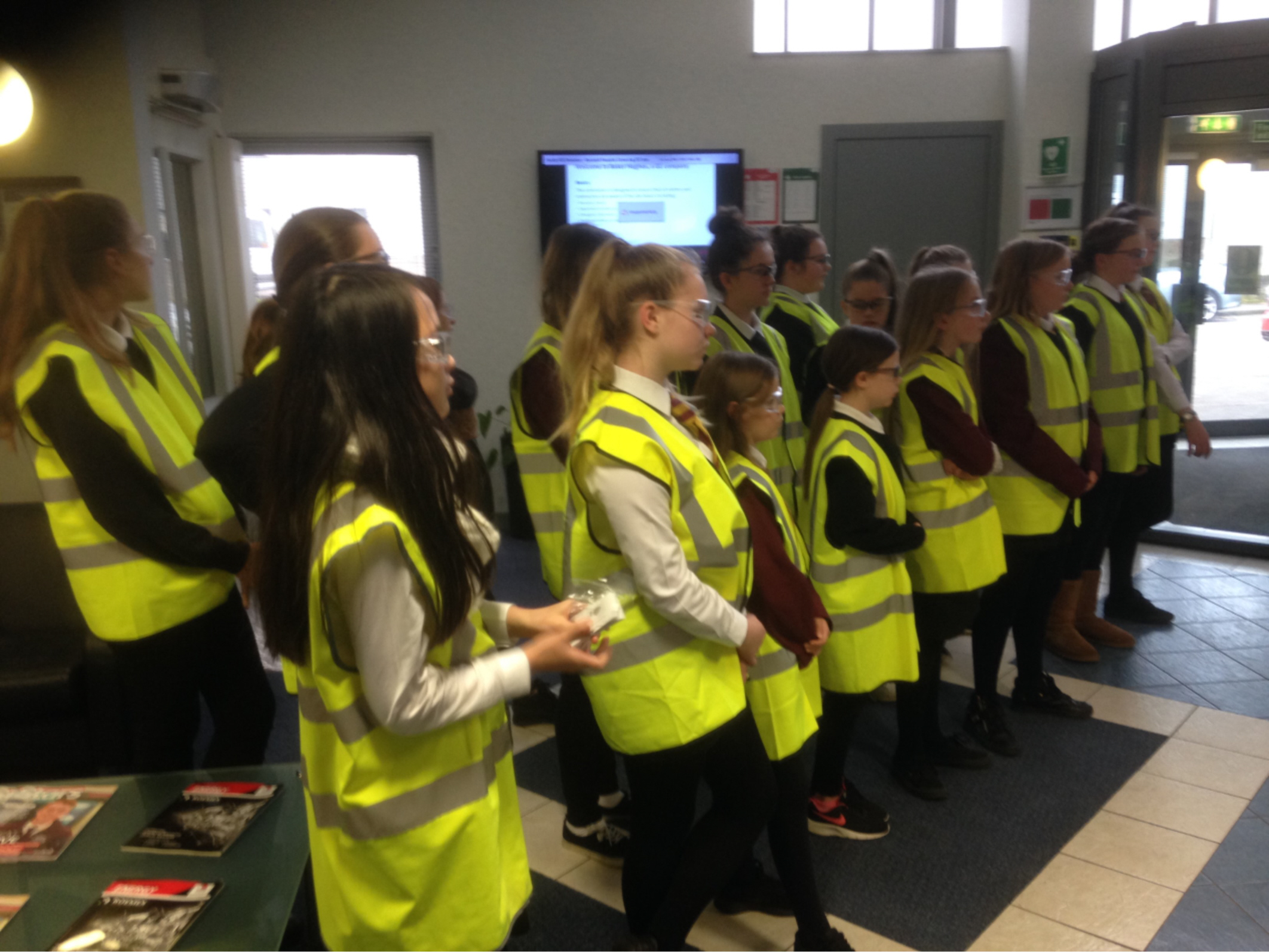 S1 and S2 girls spent a very interesting day at the Baker Hughes GE facility at Portlethen in Aberdeen recently. They worked with pupils from other schools from Aberdeen on an exercise in the morning which helped them learn more about themselves and their attributes. In the afternoon they received an informative presentation on how oil wells are drilled from the Chief Directional Drilling Engineer. They were surprised to learn that he could put an oil rig several miles from the school and direct the drill such that it would come up under their chair in the classroom!

They also toured the facility and learned about the down hole monitoring in which the engineers specialise. They met several female engineers throughout the day, who are promoting Girls Get Set and told the girls about the work they do and how they came to be doing their STEM related jobs. A group of pupils responded enthusiastically to the invitation received from Eilis Elder of KILMAC to visit one of their sites in Montrose.  It was made during a presentation which Eilis made to an assembly last month.  The school looks forward to having a productive partnership with KILMAC.  Civil engineers and surveyors are due to visit the school on Dec 6th to talk about their careers to senior pupils.

“The pupils were a joy to have and were really excited to see what we were doing. We will look forward to having them again as the job progresses” Eilis Elder, KILMAC S5 pupils hard at work in Baker Hughes GE Oil and Gas headquarters Silverburn House in Aberdeen.  Under the guidance of Mentors from the company throughout this school year they are tasked with designing and constructing a model “Christmas Tree” – a system of pipes and valves which sits on the sea bed and controls the flow of oil from a well.  They have a lot to live up to – last year Montrose Academy won the competition which involves several schools from Aberdeen.  It is held under the banner of “Girls Get Set” encouraging girls into Science and Technology however this particular project also involves boys. These girls took part in an S6 Girls Get Set “Personal Branding” workshop at Baker Hughes/GE headquarters in Silverburn House Aberdeen. Steve and Becky (pictured behind the girls) are from the Recruitment Department of the company and took the girls through how to best portray themselves in application forms, CVs, interviews etc.

This was their final GGS activity which is part of the school’s partnership with Baker Hughes/GE.   The girls had taken part in other activities throughout  S1–S5

It was an informative day where the girls learned lots – not only about the oil and gas industry but about themselves ! 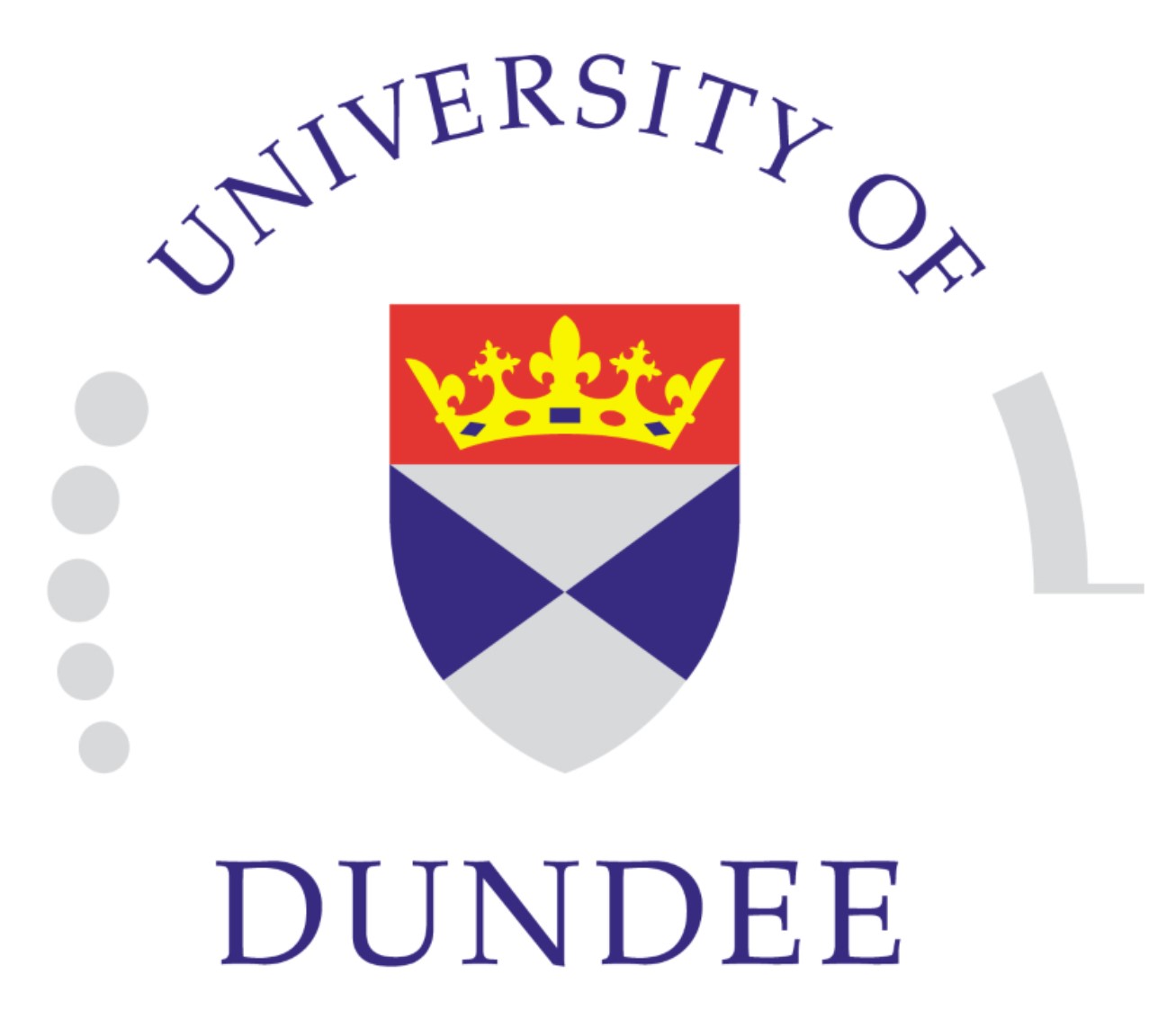 “Reach” At Dundee University for Medicine, Dentistry and Law

By Montrose Admin | Pupils, School news | No Comments
Any S5/6 pupil who is interested in exploring the possibility of a career as a Doctor, Dentist or Lawyer can register with REACH at Dundee University. They organise a programme of events including visits and student shadowing and work experience opportunities.
Student shadowing
During a student shadowing day, a Reach pupil will accompany a current medical/dental/law student during their typical day at University. This will involve pupils attending lectures, tutorials, the library, clinical skills sessions and clinics (as appropriate) under the supervision of the medical student
Work experience
Work experience is an essential requirement of applications to medical and dental school, and highly desirable for law school applications.  Pupils require experience in their chosen profession prior to committing to study in that area.  Additionally, a work experience placement gives pupils a wealth of knowledge, experience and support to help them enter these challenging professions.
You can find out more at www.dundee.ac.uk/study/widening-access/in-demand/reach
If you are interested please email
reach@dundee.ac.uk
They will then  email you back with a programme of opportunities. Please let me or your PCS teacher know if you have registered with REACH and which opportunities interest you.
Mr Dunbar
0 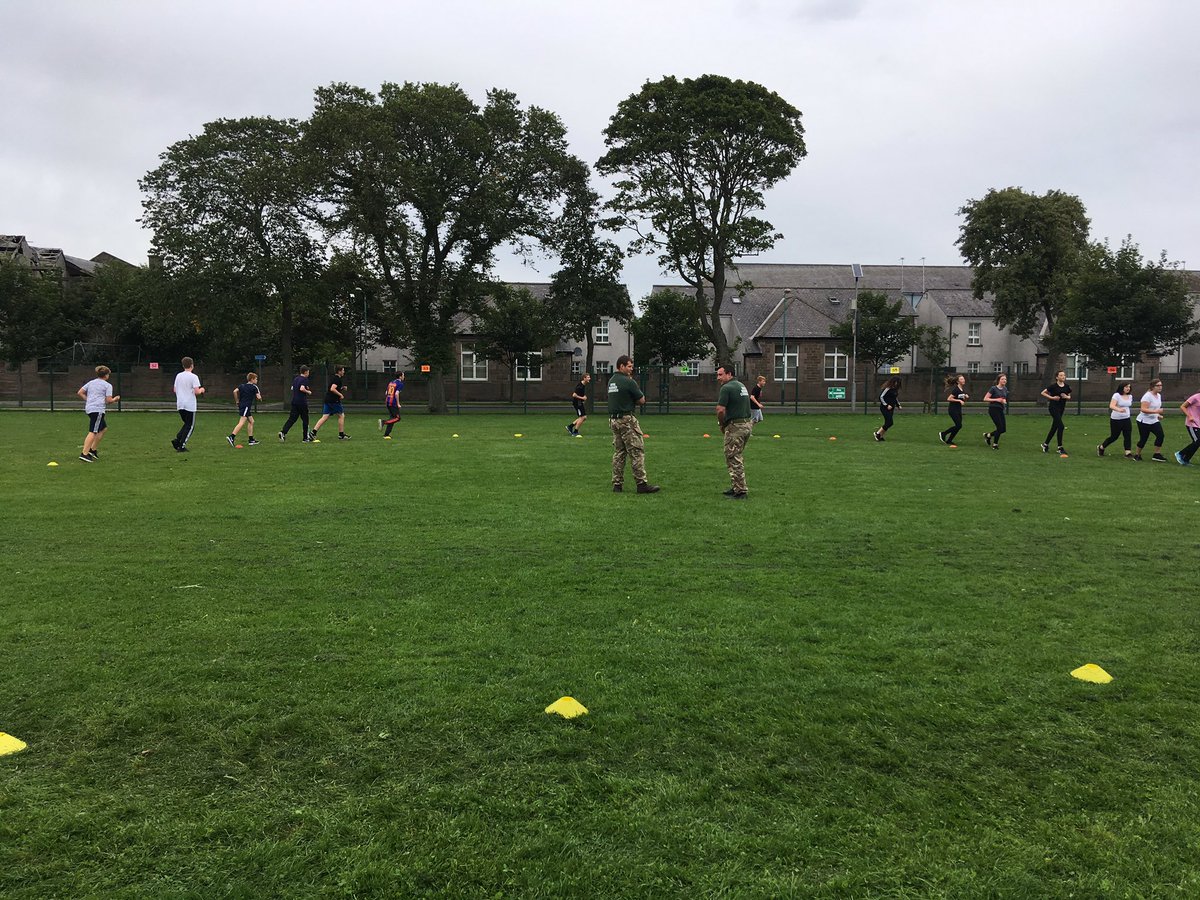 The S2 pupils at Montrose Academy have spent two days this week working with staff from the Royal Navy and the Royal Marines.

Jaffa, a chef from the Royal Navy, talked to the pupils about the benefits of eating a healthy diet and the importance of knowing exactly what is in the food they are eating.

The pupils then worked in pairs to cook meatballs and gnocchi, a dish that Jaffa had demonstrated how to cook first.

The pupils were made aware of the fact that a balanced diet is only one part of leading a Healthy Lifestyle. The Royal Marines then put the pupils through their paces to show just how important exercise is in maintaining a basic fitness level.

Judging by the faces of the pupils at the end of the activity, they certainly learned that exercise generates heat!

The pupils certainly seemed to enjoy the activities they were part of over the two days and we look forward to inviting the Royal Navy and Royal Marines to work with us again in the future. 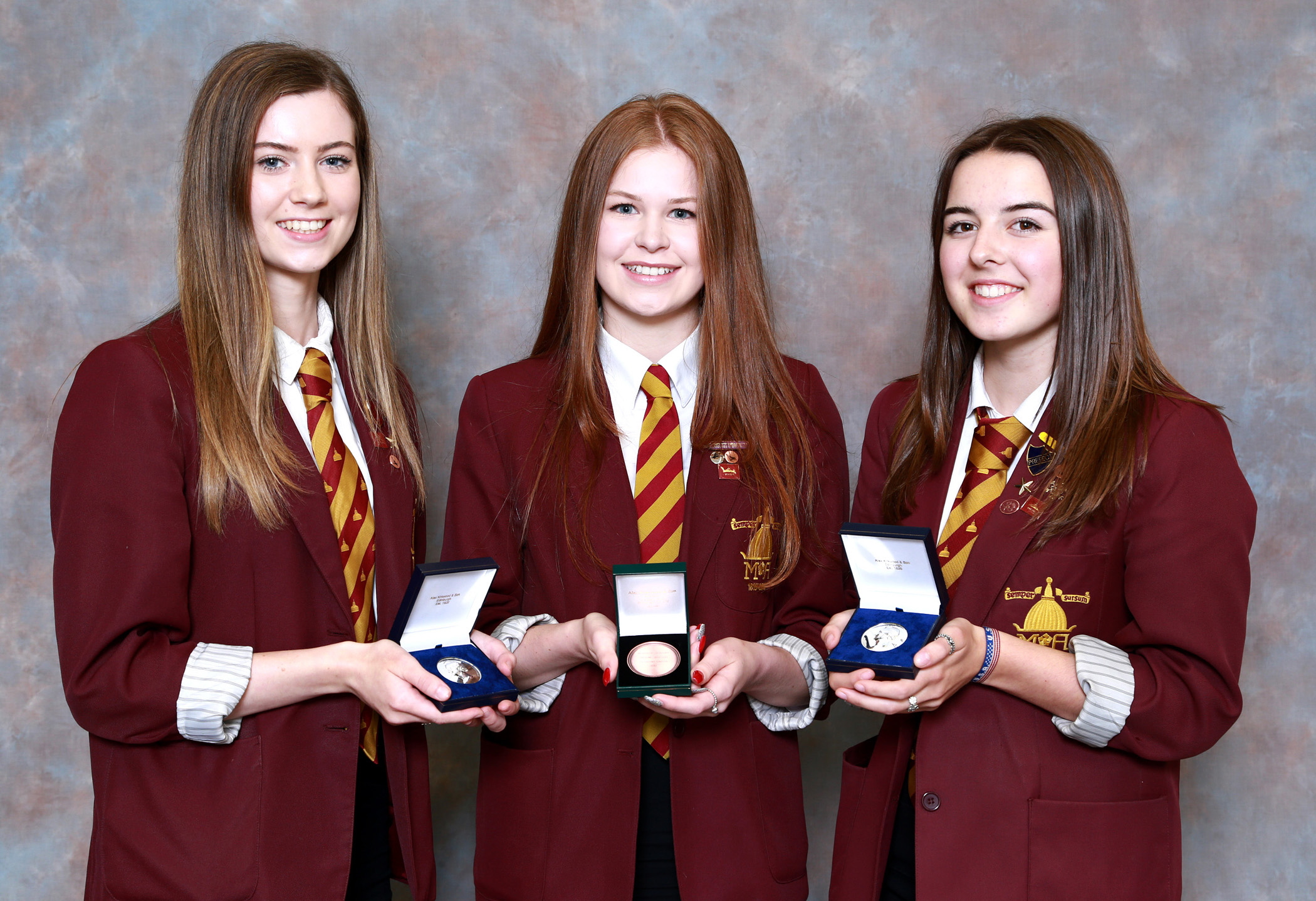 Senior Prizegiving took place on Tuesday 27th June in the school assembly hall. Well done and congratulations to everyone who were awarded prizes this year.

See below for the full list of prize winners:

This event took place on the 16th/17th of March and involved S1 to S3 pupils playing sport non-stop from 7pm to 7am. We had 60 pupils taking part and the evening involved visits to the Montrose Rugby and Montrose Tennis club. The pupils then returned to Montrose Academy and took part in a variety of sports including Basketball, Netball, football and disability sports such as boccia. The event was organised and run by Jamie McLaren (Active Schools Montrose) and a team of Young Ambassadors. The Young Ambassadors are made up of S4 to S6 pupils who are responsible for developing sporting opportunities within the school.

The 12 hour sports marathon was set up to promote sport to Montrose Academy pupils and raise money for charity. The event this year raised the following amounts: 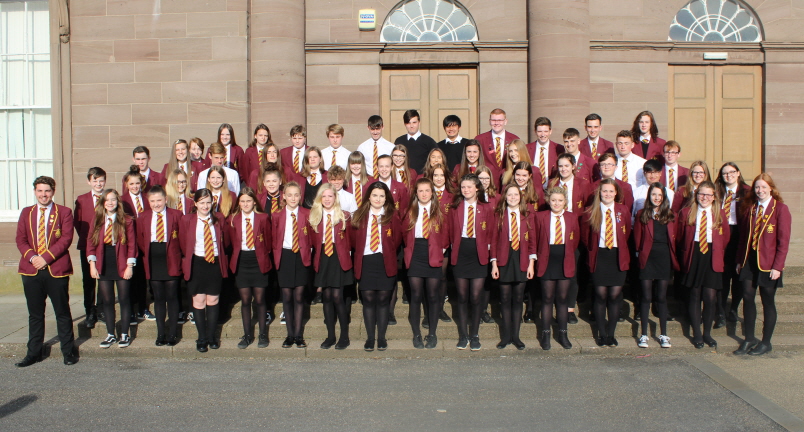 Guest speaker Steph Inglis gave a very moving and inspirational speech about training for and competing in the Commonwealth Games and  how a terrible accident in Vietnam has impacted on her life. « Previous Entries
Next Entries »
My Tweets